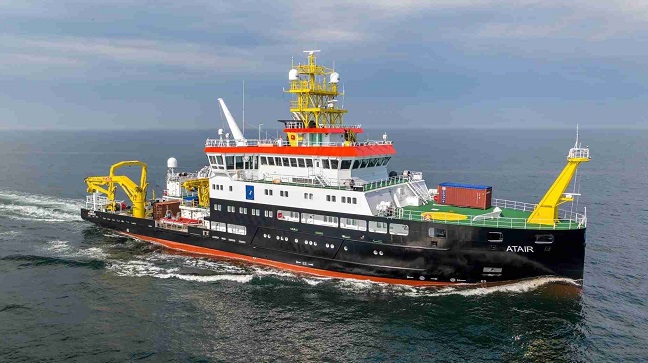 The ATAIR, commissioned in 1987, has been replaced by a state-of-the-art vessel that meets the highest environmental standards. The new ATAIR is the world's first seagoing public authority vessel with low-emission liquid gas propulsion. It is also particularly quiet. The new ship was built by the Fassmer shipyard in Berne, Lower Saxony, and went into service on 27 April 2021. The new ATAIR measures 75 m in length and around 17 m in width. It can reach a speed of around 13 knots, is stable, quiet and manoeuvrable at the same time. This makes it one of the world's medium-sized research vessels. At the same time, it is the largest ship in the BSH fleet.

The new ATAIR takes over the tasks of the former ATAIR. This includes sea surveying and wreck search. In addition, it carries out oceanographic surveys such as the annual summer monitoring cruise, for which the BSH was chartering a research vessel every year. The ATAIR is working in the North Sea, the Baltic Sea and the North-East Atlantic. As a research vessel, ATAIR is a travelling scientific laboratory and performs tasks in geology, oceanography and the development and testing of technical ship equipment, among others. ATAIR is also working in the development on new technologies and testing, for example in the field of e-navigation and smart shipping.

The ATAIR is the first LNG-powered research vessel. Worldwide, 190 ships are currently powered by LNG. This authority ship for special tasks is the first ship in the world to be powered by liquefied natural gas (LNG). Compared to a diesel-fuelled ship, the CO₂ emissions of an LNG-fuelled ship are reduced by around 20%. The emission of sulphur dioxide is reduced by 90 %, the emission of nitrogen oxides by around 80 %. Particulate matter is virtually non-existent. With a 130 m³ LNG tank, the ship can run on LNG alone for ten days. Only the highest quality gas oil with a sulphur content of less than 0.1 % is used for the diesel operation (dual fuel), which is also possible.

The new ATAIR not only complies with the exhaust emission regulations of Tier III of the International Maritime Organization, but also with the regulations of the EPA Tier IV (USA) with regard to soot particles. It also meets the requirements of the "Blue Angel" eco-label for environmentally friendly ship design RAL-UZ 141.

The underwater sounds of the ship are optimized (DNV SILENT Class Notation - SILENT R). This also protects the marine environment and ensures optimum conditions for scientific work on board.

The ship has room for a crew of 18 and 15 scientists.
The equipment includes among others