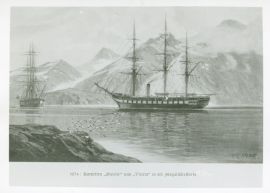 For several decades Georg von Neumayer dedicated his interest to exploring the South Polar region. At the First Geographentag (Geographer's Day) in 1865 in Frankfurt am Main he campaigned, at first unsuccessfully, for a South Pole expedition.
He eventually received support from Wilhelm von Tegetthoff (1827-1871), who promised him to lead a research trip to Antarctica. These plans were thwarted by the German-French War of 1870/71 and Tegetthoff's death in 1871.

Instead, also due to Neumayer’s active support of, the German "Gazelle" expedition to the Kerguelen took place in 1874. Among other things it was due to explore the Venus passages in front of the sun. This expedition can be regarded as preparation for further German Antarctic expeditions.

The participants of the Second International Meteorological Congress in 1879 in Rome decided to transfer the organisation of Arctic and Antarctic research to an "International Polar Commission", which had yet to be founded.

The Netherlands, Denmark, Russia, France, Norway, Germany and Sweden took part in the first meeting of this commission on 1 October 1879 in the Seemannshaus in Hamburg. Neumayer was elected as the first chairman.
Two aspects were discussed intensively. The scientists debated the geographical orientation, namely the promotion of North or South Polar research. Another aspect was the methodical approach. The options were the conduct of further expeditions or the establishment of permanent, long-term research stations.

The establishment of a German Commission for Polar Research took a long time because of different research approaches and also because of financial issues. 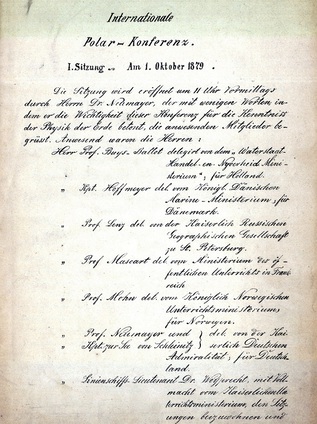 Protocol of the 1st Session of the Polar Conference

On 12 December 1882 the "German Polar Commission" was founded in Berlin with Neumayer as chairman in order to organise German participation in international polar research.

At the 11th Geographer's Day in 1895 in Bremen, a separate German Commission for South Polar Research was set up with Neumayer as chairman. Neumayer was committed to the realisation of his idea and also collected donations privately. In the years 1901 to 1903, the German "Gauss" expedition to Antarctica took place, which was significantly supported by Neumayer. At the same time as this expedition began, several other countries started their own expeditions.

The BSH Library contains the files and documents of the International Polar Commission, the German Polar Commission and its stations as well as the North, Labrador and South expeditions within the framework of the International Polar Year (IPY) 1882/83. In addition, we hold files from the German Antarctic Research (1898) and the Committee for the Rescue of German Researchers in Polar Regions (Spitzbergen, 1913).

These unique holdings are available as originals and microfiches. Their digitisation is in progress. Please contact the library if you would like to know more.

Also available at the BSH Library are files on the Second International Polar Year 1932/33. From these files we know that there has been an intensive international exchange since the mid-1920s. The second IPY originated in Germany and thus meant a recognition of German science. Please contact the library if you would like to know more.