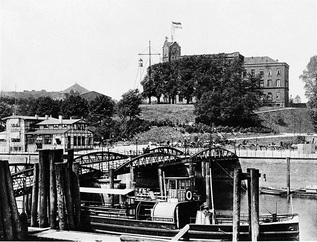 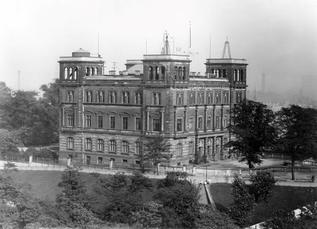 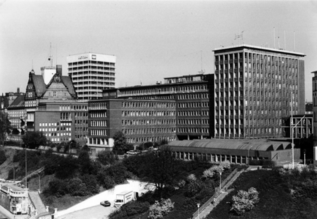 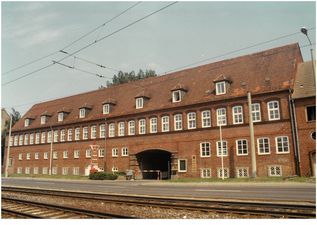 After the end of the war, the German Hydrographic Institute (DHI) is initially responsible for all four occupation zones. As cooperation between the occupying powers proved difficult, the Soviet Military Administration decided to set up a new hydrographic institution in 1948. Initially, two new marine surveying groups at the Rostock and Stralsund waterways offices perform hydrographic tasks on the coasts of Mecklenburg and Western Pomerania. At the Generaldirektion Wasserstraßen, Schifffahrt und Schiffbau (General Directorate for Waterways, Shipping and Shipbuilding) in Berlin, which was established in 1945, a department for marine surveying and oceanography is formed.

The Seehydrographischer Dienst (SHD) is established at the beginning of 1950 and takes up its work on 27 July 1950. The German Democratic Republic (GDR), founded in October 1949, thus has its own hydrographic service. The SHD is initially based in Berlin, from 1953 in Stralsund and finally from 1959 in Rostock on Dierkower Damm. Branch offices are established in Warnemünde, Stralsund, Saßnitz and Wolgast.

After the dissolution of the National People's Army on 30 September 1990, the SHD was subordinate to the GDR Ministry of Transport for two days. In the course of German unification on 3 October 1990, most of its tasks are transferred to the BSH. The location in Rostock, initially a branch office, has been an equal service location of the BSH since 1994. In June 2003, the BSH moved to a new office building in Rostock's city harbour on the site of the former Neptun shipyard.

More about the Seehydrographischer Dienst

The establishment of the SHD is proving difficult. There is a lack of specialised personnel as well as ships and technical equipment. The organisational structure of the SHD is strongly based on the structure of the DHI in Hamburg. Its tasks include nautical and hydrographic services, the publication of official nautical charts and nautical publications, maritime signalling and the official testing of nautical instruments.

In addition to the nautical-hydrographic departments, a marine science department is also established. In 1953 this department is renamed Hydro-Meteorological Institute of the SHD. In 1958, this institute becomes the Institut für Meereskunde (IfM, Institute of Oceanography) in Warnemünde, the predecessor of today's Leibniz-Institut für Ostseeforschung Warnemünde (IOW, Institute for Baltic Sea Research Warnemünde). In 1960, the institute is separated from the SHD and established as a civilian research institution within the Academy of Sciences of the GDR.

Today, the Federal Maritime and Hydrographic Agency (BSH) is THE central maritime authority in Germany. As the higher federal authority and departmental research institution in the portfolio of the Federal Ministry of Transport and Digital Infrastructure (BMDV), around 900 people in over 100 professions are involved in maritime shipping, oceanography, nautical hydrography, marine environmental protection and offshore wind energy. Five of its own survey, wreck search and research vessels operate in the German Exclusive Economic Zone (EEZ) of the North Sea and Baltic Sea. The BSH works in more than 15 international organisations and in more than 170 committees with a maritime dimension.