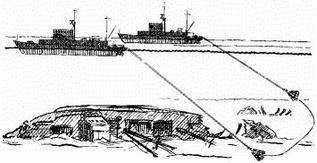 After the Second World War wreck search and investigation became an urgent task due to the numerous wrecks. It was essential to locate and monitor wrecks on the few routes cleared of mines in order to ensure the safety of shipping.

Before the war, wrecks in the coastal area were registered by the Local Offices for Waterways and Shipping. In special cases they were examined by divers. Wrecks located in deep water outside the coastal areas, which did not pose any danger to shipping, were not particularly monitored but only registered. Their position, as with all other wrecks, was announced in the "Notices to Mariners" (NfS), which are authoritative for the nautical chart.

However, many ships were lost without ever carrying out a systematic search in the wider sea area, as is usual today with modern aids. With the advent of seagoing vessels over 100,000 tons, it became necessary to register and monitor every underwater obstacle, which also benefited net fishing.

Initially wreck search was undertaken through lines, which were pulled over the sea floor with the help of two ships. This method continued to be used after the emergence of the first echosounders to find small or very narrow objects that could not be detected by the single-beam echosounder.

The development of sonar devices (echosounders) during the last war, which were used to locate submarines, also simplified the search for wrecks. During the search for unknown or investigation of known underwater obstacles, the area is scanned with the sonar beam.