The numerical (short-term) prediction of hydrodynamic parameters at the BSH is based on two models. One is the three-dimensional circulation model based on the numerical model code HBM (HIROMB-BOOS model), which was jointly developed by the BSH and European partners. The second is the two-dimensional water level and surge model based on the numerical model code BSHsmod and BSHcmod developed at the BSH. The most important and at the same time indispensable input for both models is a meteorological forecast. For some years now, current measurement data have also been brought together with the model by using data assimilation in order to further improve the predictions. 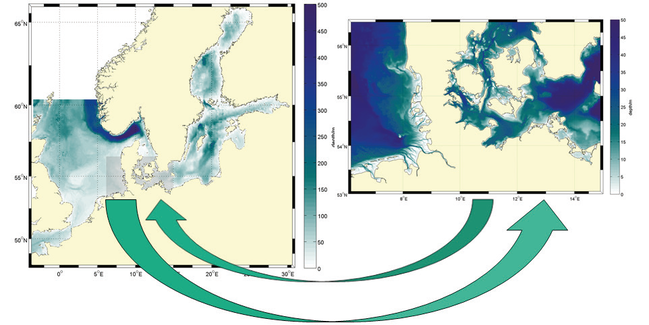 Model area/model topography of the North Sea and Baltic Sea model. On the left the whole area, on the right the area with finer resolution - both areas are fully dynamically coupled.

The three-dimensional circulation model forms the core of the forecast model system. It is calculated on several interactively coupled grids. In the German Bight and the western Baltic Sea, the horizontal grid resolution is about 0.9 km. In the remaining part of the North Sea and Baltic Sea it is about 5 km. In the area of the Tidal Elbe, an additional very high-resolution model with a horizontal grid resolution of 90 m is used for calculation. This is necessary to better simulate the complex hydrographic processes in this area.

The water column is divided into a number of layers of different thicknesses. In the North Sea and Baltic Sea there are 35 , in the German Bight and the western Baltic Sea 25 and in the area of the Tidal Elbe 7 layers.

Since also the drying and flooding of the tidal flats is simulated with the model, processes in the manifold structured German coastal waters (tidal flats, sands, tidal channels and island chains) and the water exchange with the open sea can be reproduced realistically. To simulate the temperature, not only the water but also the seabed and the sea ice are considered, which plays a major role especially in the wintry Baltic Sea.

The forecasts calculated by the circulation model for the North Sea and Baltic Sea are currently calculated four times a day, 120 hours into the future at the two main times (from 00 and 12 UTC) and 78 hours into the future at the two additional times (from 06 and 18 UTC). Since calculations for the Tide Elbe are very computationally intensive due to the high resolution, only two 60 hour forecasts of that area at the main times are currently produced every day. 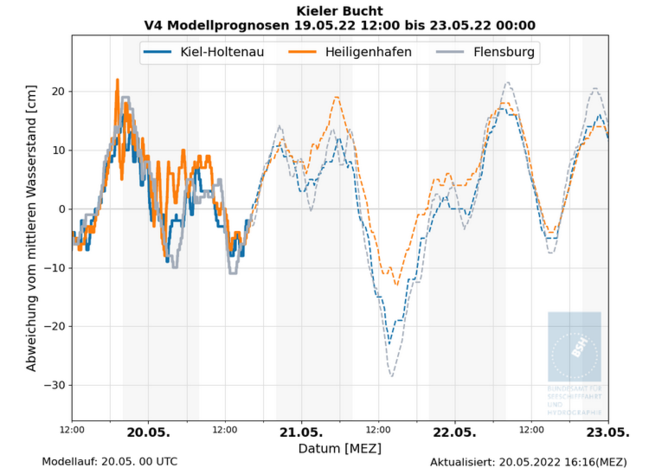 The here presented curves show water level measurements (solid line) and subsequent forecasts (dashed line). This graph illustrates the predictions of the BSH’scirculation model for various locations on the Baltic Sea coast. One recognizes the spatial differences of the water level curve.

In addition, the BSH calculates a forecast of the water level respectively the wind surge four times a day using a water level and surge model for the North Sea.

The water level and storm surge model calculates only two-dimensionally (i.e. with only one depth layer) with a horizontal grid resolution of only about 5 km. This means that it calculates very fast, which is of essential importance, especially in the case of a storm surge. For forecast periods of up to 7 days, the results form an essential basis for the BSH's water level forecasts. In particular, they represent one of the main pieces of information for the MOS (model output statistics) system of the North Sea water level forecasting service. 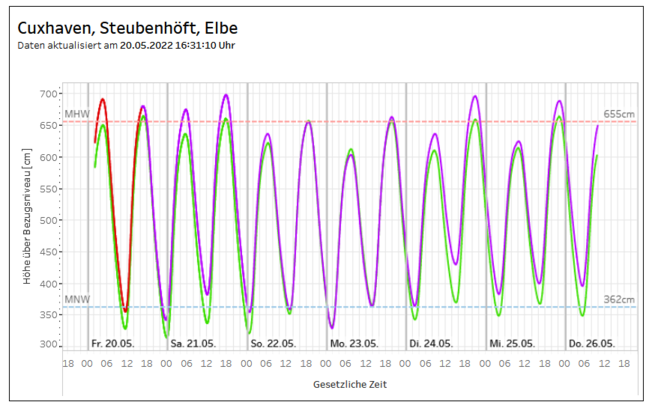 The curves show the calculation of the astronomical tide (green line), as well as water level measurements (red line) and then the prediction based on MOS values and thus also on the results of the water level and dam model (purple line).

The meteorological forecast data required for the atmospheric forcing of the BSH model are computed four times a day by the operational atmospheric model of the German Weather Service (DWD). The data is then automatically transferred to the BSH. In addition to wind and air pressure forecasts, the BSH models use air temperature, cloud cover and specific humidity above sea level to calculate heat flows between air and water.

In order to achieve the greatest possible fail-safety, the required data is supplied to both a BSH computer in Hamburg and a BSH computer in Rostock. In parallel, the BSH also receives another meteorological forecast data set from the European Centre for Medium-Range Weather Forecasts (ECMWF). In addition to the increased fail safety, the use of several data sets should make it possible to add an uncertainty or probability statement to the model prediction in the future.

In order to increase the quality of all predictions, we are working on creating a connection between the model simulations and the measured data. Methods of data assimilation allow the model simulation to be optimally linked with measurements without disturbing the dynamics of the model. 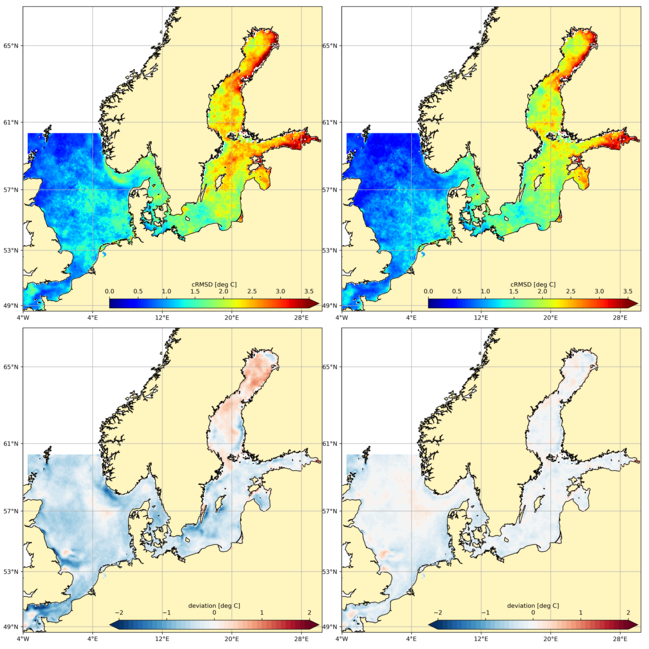 Spatial distribution of the root of the centered squared error (cRMSD, top) and the mean error (bottom) from the free run of the circulation model (left) and the run with data assimilation of sea surface temperature (right) during the period from July 2019 to June 2020.