Since the ecological condition of the North Sea and Baltic Sea is increasingly in the public focus, the BSH also operates an ecosystem model component since a few years. Thus, the BSH is able to provide daily updated information on issues concerning the occurrence of toxic algal blooms. Likewise, information on the occurrence of oxygen-poor marine regions as a result of high nutrient inputs can be provided. The strength of this model information lies in its high spatial and temporal availability. They thus complement measurements carried out in the marine environment.

The ecosystem model used at BSH is called ERGOM (www.ergom.net), which is coupled to the three-dimensional circulation and flow model HBM (HIROMB-BOOS model). It calculates the basis of the complex food chain, focusing on the relationships between nutrients, oxygen, depth of visibility, small free-floating algae, and small free-floating organisms. The calculation of these basic important processes is already sufficient to describe water quality. In addition, the impact of increasing atmospheric CO2 concentrations on water chemistry is calculated. The resulting increase in acidification is reflected in a steadily decreasing pH from year to year. However, near the coast and in marginal seas such as the Baltic Sea, this effect can be superimposed by biomass buildup and decomposition. Such processes are also reflected in the concentration of dissolved gaseous carbon dioxide, also known as pCO2 for short.

Chlorophyll concentrations [mg/m³] on 04/20/2008 in the German Bight. The model calculation (left) reproduces the extent of the phytoplankton bloom observed by satellite (MODIS, right).

Modeled pH (left) and dissolved gaseous carbon dioxide [µatm] (right) in the Baltic Sea at the surface on 03/21/2014.

Modeling of water quality using oxygen as an example

Nutrients enter the water column via adjacent rivers and the atmosphere. These nutrients are taken up by the so-called phytoplankton, which builds up biomass from carbon dioxide and nutrients with the help of photosynthesis. The more nutrients available, the more biomass can usually be built up. Over the course of the year, this biomass is decomposed again. This process consumes oxygen and takes place in the water as well as on the seafloor.

In the North Sea and Baltic Sea, differences in density often cause stable stratification of the water, which can occur for a short time, over several months or years. As a result, the lower layer is cut off from oxygen exchange with the atmosphere. If biomass is then decomposed on the seafloor, the oxygen concentration decreases as long as the water is stratified. Thus, a high nutrient load from rivers can lead to very low oxygen concentrations or even complete depletion of oxygen on the seafloor. Such situations indicate poor water quality and harm living organisms, especially those that live on the seafloor.

The figure shows model results of a typical situation in late summer in the German Bight. Here, the oxygen concentration continues to decrease until finally the storm front Sebastian leads to a literal ventilation of the water. 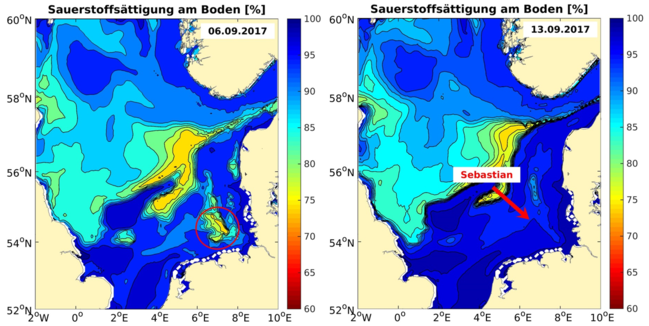 Oxygen saturation at the seafloor of the North Sea before (left) and after (right) Storm Sebastian passed over the German Bight.

Other uses of biogeochemical model data

The high temporal and spatial resolution of the model data enables new perspectives in the assessment of the environmental conditions of the North Sea and Baltic Sea. Thus, they offer an ideal complement to the regular campaigns that measure directly on site in the marine environment. For example, it is possible to indicate on how many days a year certain limit values are exceeded. It is also possible to track how great the influence of nutrients from a particular river is on specific locations in the marine environment. To do this, the ecosystem model allows elements such as nitrogen to be tracked from the source through different states in the ecosystem. 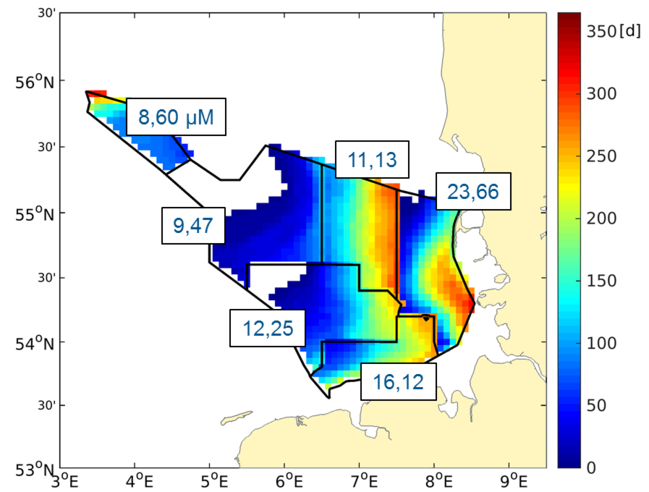 The number of days with limit value exceedances of total nitrogen in the German Bight in 2012 is shown in color. The limit values [µM] shown here refer to old assessment areas of the OSPAR (Oslo-Paris) agreement. Figures showing new assessment areas are available on request. 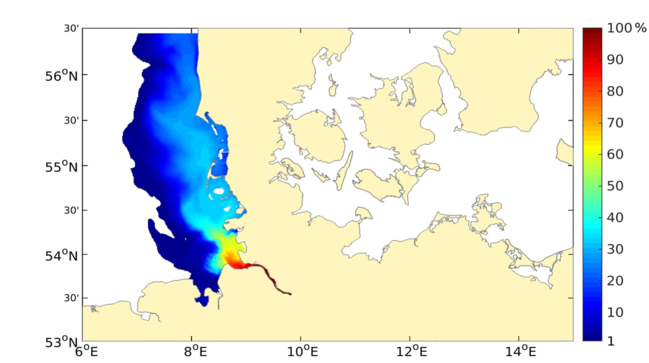 Percentage of total nitrogen from the Elbe [%] in the area of the German Bight and the Baltic Sea on August 26, 2012. Only the percentage of nitrogen that has entered the model system since January 1, 2012 is shown.