Simulation of drift and dispersion processes in the sea

The role of the BSH

The BSH is responsible to perform drift and dispersion forecasts and backwards simulations for internal purposes and on behalf of other authorities. How substances and objects disperse in the sea is of crucial importance in many cases. For example, the BSH answers the question where lost containers drift to or where the oil slick drifts to in the event of an oil spill. The results help with various tasks. 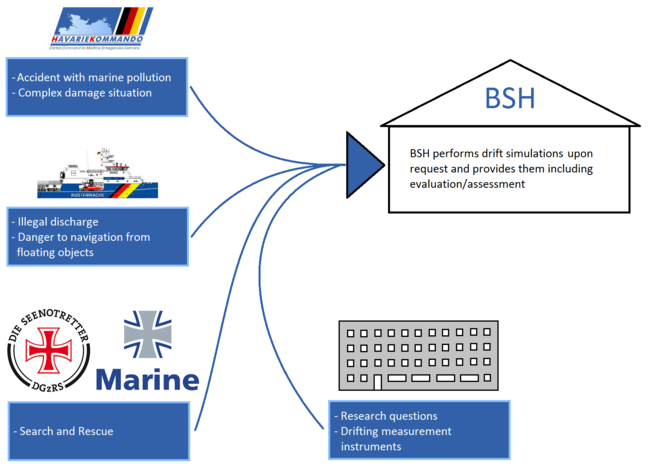 Drift simulation of an object (forward)

Drift simulation of an object (backward)

Drift simulation of a substance (forward/backward)

For these objectives, the BSH uses either the Lagrangian drift or the Eulerian dispersion model. These models simulate the drift or dispersion of objects and substances forward or backward in time, respectively. Depending on the nature of the query, results are also delivered within the shortest possible time and at any time of day or night. This is the case, for example, with oil spills. 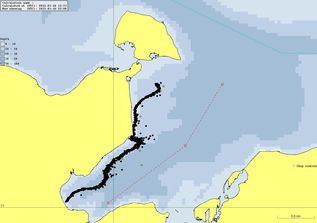 Simulation of the drift of spilled oil along the main shipping route from Lübeck.

For the simulation of drift and dispersion of substances, the investigated substance is treated like a "particle cloud" (Lagrangian method). The particles are drifted under the influence of the currents. Floating substances are additionally transported with a certain percentage of the wind speed. When simulating an oil dispersion, the variable physical behavior of different types of oil on the water surface and in the water column is also taken into account. In addition, the model is often used to determine the area of origin of a substance, in which case a backward calculation is performed.

The Lagrangian model can be used to perform dispersion and drift calculations for oil and water-soluble chemicals, as well as drift predictions for people and objects. For example, forward calculations are performed for boats, cargo that has gone overboard, or missing persons; backward calculations are used to determine sources of pollution or unknown persons found.

The Lagrangian model is used, among other things, to support the average operations in current marine pollution incidents. It is thus an important tool for determining the originator of a pollution. However, the Coast Guard also requests a simulation and assessment of the drift in the event of danger to shipping or the discovery of illegal substances. Search and rescue is supported by the BSH with current forecasts that can be read into its SAR system. In some cases, requests for a drift simulation are made by research institutions or the BSH itself, e.g. in the case of detached wave buoys, transmitters or measuring instruments.

The Eulerian dispersion model simulates the temporal evolution of concentration distributions. The transport algorithm used in the model allows the representation of strong concentration differences (fronts).

Studies on the dispersion of water-soluble substances and on the water quality of the North Sea and the Baltic Sea are therefore mainly carried out with the Eulerian dispersion model. The model can, for example, provide an answer to the question of how harmful substances that enter the sea through rivers spread and disperse.