WTo create climate scenarios as part of the DAS core service the BSH operates two regional ocean models based on the numerical model codes HBM and NEMO. In contrast to the circulation model which is used for the daily forecast calculations with these climate models are made for several years to decades. These climate projections extend up to the year 2100. Since running the models over such a long period of time is very computationally intensive some of the ocean models are operated with a lower resolution.

The calculation of the future climate in the North Sea and Baltic Sea is important in order to determine the changes in the thermal and dynamic structure of the water bodies. The regional impact of global sea level rise on the coast can also be estimated in order to take measures to protect it. The products generated from the climate models can be found under the Website "Climate and Water" (in progress) or at www.das-basisdienst.de.

The core of the model system is formned by a three-dimensional circulation model. This model calculates on several interactively coupled grids and is made available to the BSH in this configuration by the Danish Meteorological Institute (DMI). In the German Bight the horizontal grid spacing is about 1.9 km, in the Danish Straits and the western Baltic Sea about 0.9 km and in the rest of the North Sea and Baltic Sea about 5.6 km. The water column is divided into layers of different thicknesses (50 layers in the North and Baltic Seas, 24 layers in the German Bight and 52 in the Danish Straits and western Baltic Sea).

Among other things, the model system simulates water levels, currents, water temperature, salinity and sea ice for the entire model area and is used to calculate possible scenarios up to the year 2100 on the basis of climate projections. Together with the DMI, an ensemble of climate scenarios will be created which can make statements about possible scenarios on the German coasts with the help of statistical analyses. 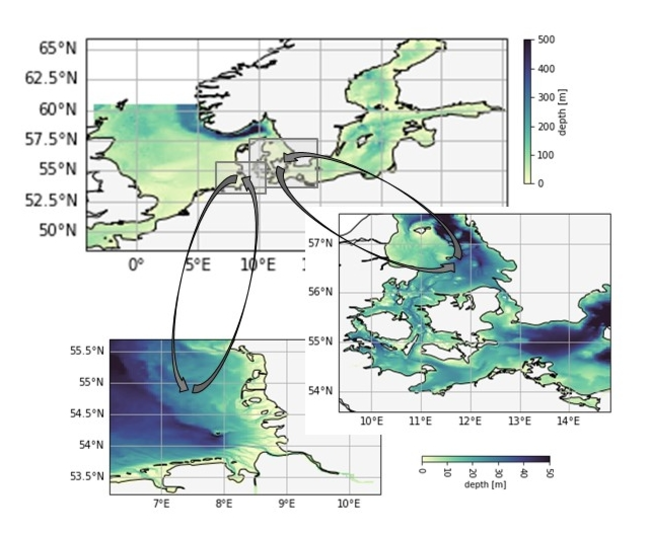 Model areas with depth data of the North Sea and Baltic Sea models. Above the whole area, below the areas with finer resolution - both are fully dynamically coupled.

In addition to the Baltic and North Seas, the area of ​​the regional ocean model NEMO also includes parts of the north-east Atlantic up to Iceland at the north-west corner and to the Iberian Peninsula in the south. A horizontal resolution of 2 nautical miles (about 3.6 km) grid spacing is used to cover this area. In order to cover the depth difference of about 5000 m in the Atlantic and the shallower waters of a few decameters in the Baltic Sea, 51 layers are used vertically. The layer thickness varies depending on the height of the water column and follows the terrain at the bottom. These are so-called sigma surfaces.

Model area with depth information as used in the regional configuration of the NEMO ocean model.

Using primitive basic equations, currents, water level, temperature and salinity are simulated. In addition to the dynamic core, the model has an integrated ice model, which is particularly important for the northern Baltic Sea (Bothnian Bay) in winter. The wetting and drying of the wadden sea cannot be simulated with the current NEMO setup but will be available in future model setups.

As an uncoupled model, NEMO requires information on air temperature, radiation, air pressure and wind thrust as external forcing from an atmospheric model.