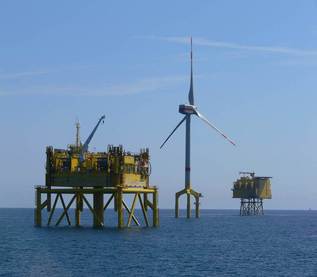 On the basis of the Wind Energy at Sea Act (WindSeeG), marine sector planning deals primarily with the planning of areas for wind energy at sea and offshore grid connections.

Surrender of the Site Development Plan

In its central model, the FEP is the controlling planning instrument for the use of offshore wind energy and offshore grid connections.

The scope of application of the FEP relates to the German Exclusive Economic Zone of the North Sea and the Baltic Sea. If an agreement is concluded between the BSH and the federal state of Schleswig-Holstein, Lower Saxony or Mecklenburg-Western Pomerania, the FEP may, under certain legal conditions, also make provisions for the respective territorial sea.

In addition, the plan mainly deals with spatial determinations for cross-border (international) grid connections and connections between grid infrastructures. The technical planning specifications are made on the basis of planning and standardised technical principles.

The FEP determines the chronological order in which the areas for offshore wind turbines will be put out to tender and the wind turbines will go into operation. In determining the order, criteria such as the efficient use of existing and planned grid connections, the spatial proximity to the coast, conflicts of use on an area, the expected capacity to be installed on the area, the expected buildability and the resulting suitability of the area for cost-efficient power generation play a role.

The plan will be drawn up for the first time in 2018 and 2019 and will generally be updated every four years or as changes occur.

The BSH establishes the FEP in a comprehensive coordination and consultation process. Authorities whose areas of responsibility are affected, recognised environmental associations, transmission system operators and private individuals have the opportunity to express their views in the consultation process. The comments will be taken into account when the plan is drafted.

During the preparation and updating of the FEP, the significant effects of the implementation of the plan on the marine environment are also identified, described and assessed.

With the FEP, the task of the Federal Offshore Spatial Planning, which has been performed by the BSH since 2011, will be continued. The federal sectoral plans for the German North Sea and Baltic Sea EEZ and parts of the previous Offshore Network Development Plan (O-NEP) are merged in the FEP. The demand for offshore grid connections is determined by the Federal Network Agency on the basis of the Network Development Plan in the land-based network development plan.