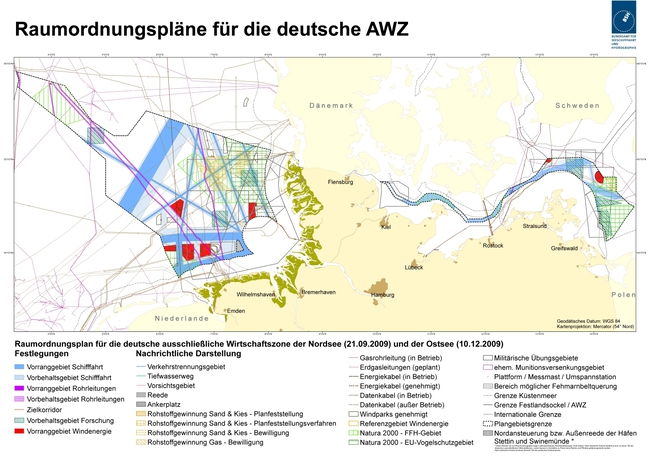 On 11 June 2019, the Federal Ministry of the Interior, Building and Home Affairs (BMI), with the support of the Federal Maritime and Hydrographic Agency (BSH), started the revision and updating process of the maritime spatial plans. The existing plans have been in force since 2009 and are expected to be revised and updated until 2021.

The BSH carries out the task of maritime spatial planning of the EEZ in the North Sea and Baltic Sea on behalf of the responsible Federal Ministry.

The legal basis for the establishment of maritime spatial plans in the German EEZ is the Federal Regional Planning Act, which was extended to the EEZ in 2004, and last amended in 2017 to implement the EU Directive on Maritime Spatial Planning. In contrast to the territorial sea, the EEZ does not belong to the territory of the Federal Republic of Germany. Maritime spatial planning must therefore respect the freedoms of the UN Convention on the Law of the Sea, such as the freedoms of navigation, overflight and to lay cables and pipelines. It is therefore a matter of "limited spatial planning".

• economic and scientific usage,
• ensuring the safety and ease of maritime navigation, and
• the protection of the marine environment.

The maritime spatial plans were established in a broad-based consultation process, in which submissions of authorities, associations and private individuals were obtained and evaluated at various stages of the planning process. In 2009, the plans entered into force as ordinances.