The international Argo program is a collaboration between more than 50 research organizations from over 30 countries. It aims at providing essential observational data from the upper, climate-relevant layers of the world's oceans. These data are collected using robotic drift devices called Argo floats. Floats are deployed in the ocean from research vessels. They descend to a predetermined depth of about 1,000 m and then drift passively with the ocean currents at this depth for about 10 days. Afterwards, they sink to depths of 2,000 to 6,000 m. From there, the floats ascend to the ocean surface and measure, among other things, data on temperature, salinity and pressure during the ascent, so-called vertical profiles of the respective measured parameters. After surfacing, the float transmits its data via satellite in near real-time to national data centers, where the data are checked for errors. Within 24 hours, the data are forwarded to data centers in France and the USA, which make the collected global Argo data set freely available to the public. Oceanic measurements by Argo floats provide an important basis for climate monitoring, marine research and weather forecasting. 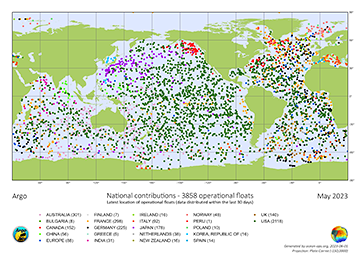 As part of the international Argo program, nearly 4,000 Argo floats are currently active in the world's oceans, providing data profiles year-round. Argo floats are nowadays deployed not only in the deep oceans, but also in marginal seas such as the Baltic Sea and also in the ice-covered polar regions. With about 120,000 profiles per year, the data supply far exceeds the number of ocean measurements that can be obtained from research vessels. The Federal Republic of Germany funds about 50 floats per year that contribute to the international Argo program. The Argo Germany team of the BSH is responsible for the implementation of this contribution and supports all float deployments. Within this framework, we also participate in the development and further extension of the Argo program in terms of content and technology.

Further information on the Argo program 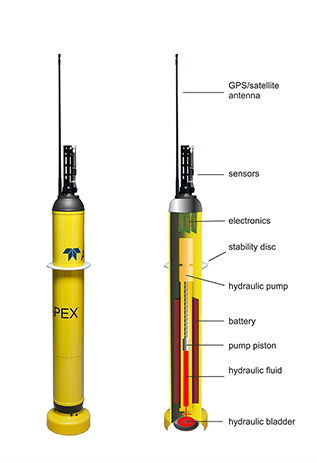 Argo floats are autonomously measuring drifting devices. They are about 1.6 to 2 m tall and weigh between 20 and 30 kg. The ability of an Argo float to ascend and descend results from changing its buoyancy through volume change. This is achieved by pumping mineral oil from an internal reservoir into or out of an external bladder, which inflates or contracts accordingly. This changes the buoyancy of the float, allowing it to change its depth. The life of a float is limited by the performance of the built-in batteries. At the end of its life, the float sinks to the seafloor where it decomposes into its chemical components. Studies of the environmental risks have shown that the amount of all floats deployed worldwide to date would cover the area of less than a soccer field. The chemicals introduced into the deep ocean during decomposition are generally negligible compared to the natural and other additional anthropogenic inputs of these substances into the ocean. 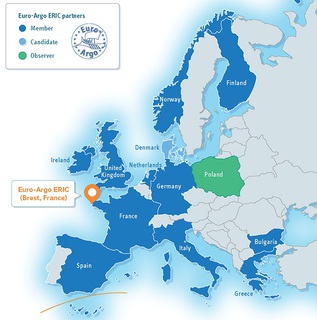 In order to coordinate national activities at the European level, a consortium for a research infrastructure in the field of ocean observations was established by the EU in 2014, the EuroArgo-ERIC (European Research Infrastructure Consortium). The Federal Republic of Germany is a founding member of the EuroArgo-ERIC and one of the now 11 contractual partners of this consortium.

In order to maintain the worldwide network of 4,000 active floats in the long term, 1,000 floats have to be redeployed every year. The EuroArgo-ERIC aims to enable the European national partners to contribute 250 floats per year to maintain the float network through improved coordination and logistics. The EuroArgo-ERIC also ensures that the associated data processing and quality control are performed and developed in Europe.

The EuroArgo-ERIC also participates in the development of the Argo technology. Newly developed sensors for chemical and biological measurements are installed on the floats through coordination by the EuroArgo-ERIC. These sensors will enable observations and assessments of the state of deep oceanic ecosystems. Further technological improvements aim at extending measurements from the sea surface to the seafloor and expanding the float network to the ice-covered polar regions.

Within the framework of EU funding opportunities, several research projects have been carried out under the coordination of EuroArgo-ERIC. The Argo Germany team at BSH has participated in the MOCCA (Monitoring the Oceans and Climate Change with Argo) and EuroArgo-Rise (Euro-Argo Research Infrastructure Sustainability and Enhancement) projects, among others. Within the framework of these projects, significant technological enhancements were carried out, and the associated data management was expanded.

Argo Germany - BSH activities in the framework of Argo

The Argo Germany team at the BSH currently consists of four employees covering scientific and technical aspects (see contact list). Each year, Argo Germany procures and deploys about 50 floats on behalf of the Federal Republic of Germany to help maintaining the global Argo monitoring network.

Within the framework of projects and committees, we work very closely with partners from national and international scientific research institutions and universities (i.e. the Alfred Wegener Institute for Polar and Marine Research (AWI); GEOMAR Helmholtz Centre for Ocean Research Kiel; Institute for Baltic Sea Research Warnemünde (IOW); Institute for Chemistry and Biology of the Sea (ICBM) at the University of Oldenburg). Regarding the deployment of Argo floats on scientific research cruises, we cooperate closely with the responsible chief scientists, whose support is essential for the Argo program.

Analysis and use of Argo data at the BSH

Within the framework of national and international projects, Argo Germany addresses a variety of technical and scientific topics: 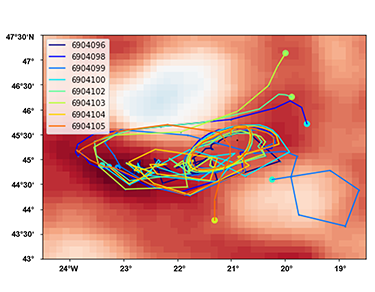 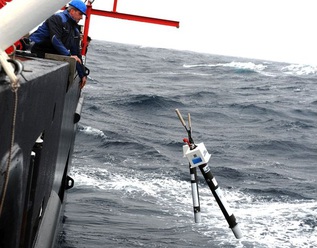 Deployment of two Argo floats with different sensors that are compared by means of a swarm experiment. Source: M. Schumacher, Geomar 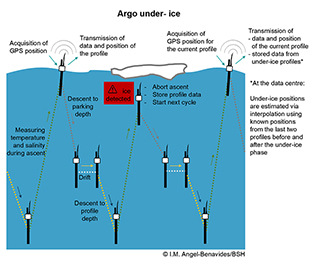 Measurement cycle and adaptation of the behavior of an Argo float in polar regions with sea ice occurrence Source: I. Angel-Benavides, BSH

In order to maintain the global Argo monitoring network of 4,000 active floats with a lifetime of about 4 years, 1,000 floats have to be deployed internationally every year in order to avoid any gaps in the monitoring network. Taking into account available sea research cruises and research vessels, Argo Germany organizes about 50 float deployments per year with a focus on the Atlantic Ocean. The exact deployment positions depend mostly on the routes of the available ships and at times serve particular scientific questions. 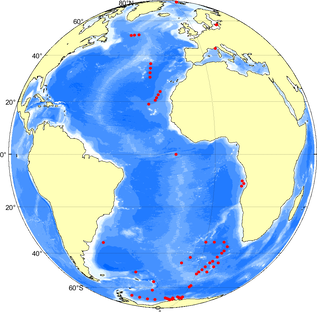 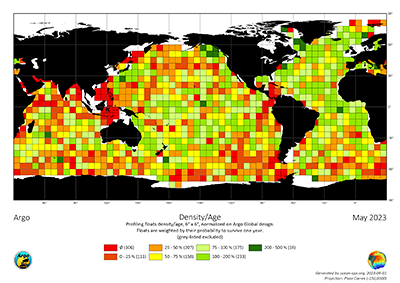