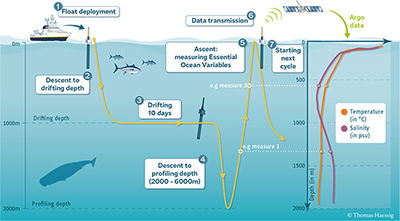 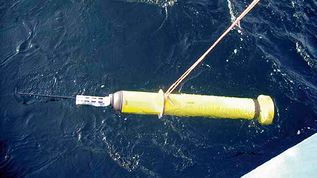 An overview of the German Argo activities is provided by this brochure.

The BSH Argo team consists of four staff members, scientists and technicians (see contacts). BSH supplies around 50 floats per year for array maintenance of the and for current research and observing programmes.

A further focus of BSH is data processing and data quality control. In cooperation with the Argo data centers incoming data are decoded within 24 hours. On longer time scales the data profiles have to undergo quality checks and the drift tracks must be monitored. If a float which was deployed on the high seas drift into national territorial waters, the respective national authorities have to be informed.

BSH also supports university partners (e.g. by undertaking the data control), is national focal point in case of arising problems and organises regular national user meetings. BSH also represents national Argo interests within European and international committees and is engaged in projects for the technical and scientific advancement of Argo.

One of the legal tasks of BSH is the monitoring and assessment of changes in the marine environment in the North Sea and Baltic. The North Sea is a shallow shelf sea whose physical status, primarily characterised by temperature and salinity, is to a large extent determined by the exchange of water masses with the Atlantic at its open northern boundary. There is also a link to the Atlantic via the English Channel which is much smaller but important for the shallow southern North Sea. The main inflow paths of Atlantic water are the Fair-Isle Channel between the Orkneys and the Shetlands, the East Shetland shelf and the western slope of the deep Norwegian Trench. Over these pathways the Atlantic exerts a significant influence on the oceanographic conditions of the North Sea.

To understand and assess the long-term changes in the North Sea, the changes in the bordering Atlantic must be considered. Here, Argo floats provide year-round comprehensive reliable temperature, salinity and density data as well as information about the large-scale circulation in the parking depth of the floats (generally 1.000 m). Changes in the Atlantic and the North Sea with time scales up to several 10 years are caused by climate change as well as by natural variability partly forced by atmosphere.

One example of the usage of Argo data at BSH is shown by the results of a study of the source water masses of the North Sea inflow from the Atlantic via the northern boundary and the English Channel. Two areas have been defined for this study: one area at the northern boundary of the North Sea and a second one at the outer entrance of the Channel (black polygons in the figures). For the period from 2.000 to 2015 all floats which entered the polygons have been registered and the deployment positions of these floats have been identified in order to determine their source regions (yellow circles in the figures). The analysis reveals that the floats/water masses came from the subpolar gyre as well as from sub-tropical regions. 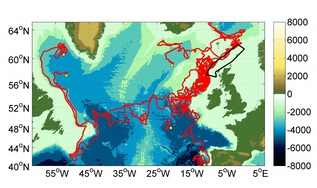 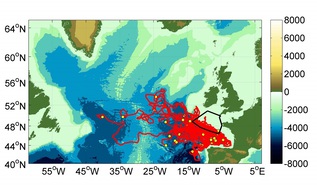 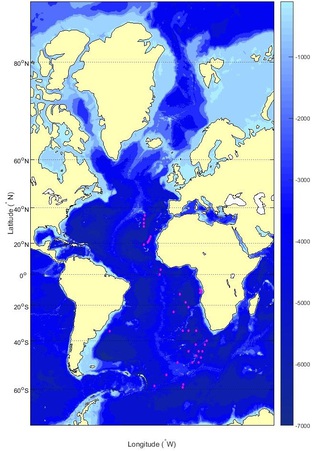 The figure shows the probable position of BSH floats to be deployed by research vessels during the next months. Detailed information is available within this table.