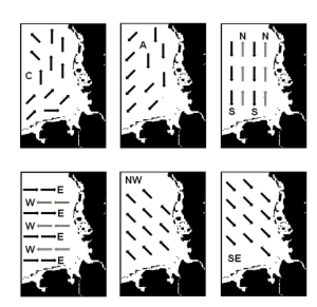 Daily averaged residual currents of the upper model layer (0 – 5 m depth) of the BSH’s operational circulation model BSHcmod version 4 are used to classify the daily circulation pattern in the German Bight between 53° 15’ – 55° 30’ N and 006° 30’ – 009° 00’ E. The daily averages correspond to about two periods of the dominant semi-diurnal M2-tide (24.84h), the resulting small averaging error is negligible concerning the identification of the daily circulation patterns. An evaluation basing on the period 2000 to 2019 results in the following frequencies of circulation patterns: About 40% for the cyclonic pattern C with a pronounced inflow at the south-west border and outflow at the northern border, about 15% for the opposite directed anti-cyclonic pattern A, and about 30% for the variable current pattern V. The six directional types with currents towards the E, W, N, S, NW, and SE play only a minor role. They are generally observed in connection with strong wind events and for annual and seasonal statistics they are combined in the directional type DIR (DIR = E+W+N+S+NW+SE) with a frequency of about 15%. Due to the course of the coastline there are no SW and NE patterns.